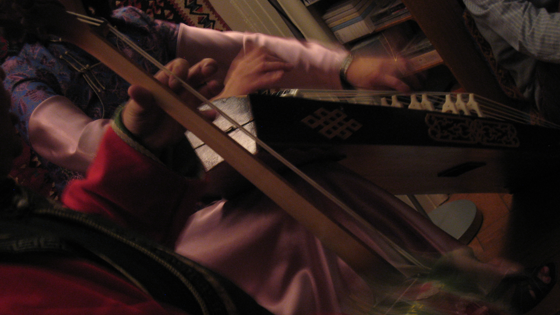 An experimental music theater project for string players, led by Helmi Vent in the context of her guest teaching at the "College of Music and Dance", Ulanbaatar (Mongolia), September 1–13, 2006

The participants in the project “Strings in Conversation” were students and teachers of the artistic subjects violin (classical), yatga (plucked zither) and morin khuur (horsehead fiddle). The participants encountered each other at the College of Music and Dance in Ulanbaatar in this configuration for the first time. The project was linked with a seminar “Art as Device”, a theory of perception by Viktor Shklovsky (see seminar page).

In improvised interventions, we took up Shklovsky’s recommendations and attempted to prolong perception processes in the course of making music and to disturb the listener’s sense of orientation through hearing. Played compositions (violin) and sung and played traditional songs (singing with yatga and morin khuur) appeared in new contexts, in a different environment. By taking apart melodic and rhythmic components and putting them together in new constellations, we robbed song passages of their familiarity. Deliberately. Such defamiliarizations make interaction difficult and, according to Shklovsky, prevent an automation of perception. And that is precisely his point: that the goal of art is not “recognition”, but unbiased “seeing” (and in our case, hearing).

In the usual cycle of instrumental and vocal artistic training, the object is, for one thing, to optimize artistic competences in the interpretative performance of composed or traditional works. Another goal – e.g. in the current project – can be to deal with “art as device” through experimental performance modes in artistic practice and to understand it as an aesthetic category in solo and ensemble playing and learn to translate it to the strings of one’s one instrument and one’s own voice. “Art”, according to Shklovsky, “is a means of experiencing the making of a thing”.

MNB – Mongolian National Broadcasting:
Recording and broadcast of excerpts from the project on September 12, 2006