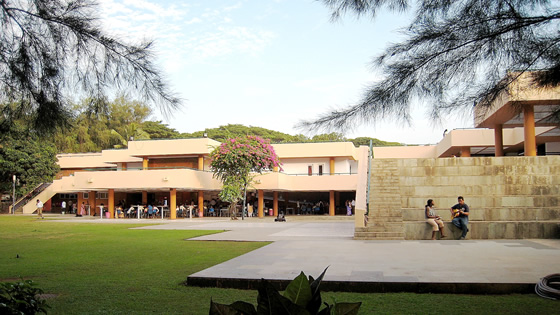 In the context of Lab Inter Arts, four students from different fields of study at the Mozarteum had prepared themselves for the "ConCom Project”, which was to be implemented over a period of several years. Six students of the Kala Academy/Goa, an arts education institution and centre of arts and culture in India, awaited the visitors from Salzburg in December 2009. The initiator and organizer of the two-week project was Prof. André de Quadros of the School of Music of Boston University (USA), who had asked Prof. Helmi Vent, head of LIA – Lab Inter Arts, to take charge of the project development and implementation in India.

Helmi Vent: "We started our preparatory work six months before departure. We made a film (as a gift for our hosts) about parts of our work at Lab Inter Arts, studied texts about Indian culture, religion, society, and intercultural philosophy, and watched documentary films about India and its people and their arts.
These preparations were one part of the ConCom Project. The other part was traveling to India and working with the students of the Kala Academy; this involved coping with the hot, humid climate, getting accustomed to Indian English, as well as enjoying the unexpectedly beautiful Academy campus, to which saris, jeans, and silk scarves lent bright spots of color – and the people, too: the teachers and the students, whose lives and teaching/learning culture – in particular, their understanding of music theater, dance theater and dramatic theater – are so very different from our own. So much seemed strange to us, and at the same time we Central Europeans seemed just as strange to our hosts, above all the ways in which we expressed ourselves artistically with our instruments, bodies, and voices to create performances. Together we sought common denominators, at first in everyday communication and later at the level of artistic communication. Such a process takes time; you have to find ways of laughing together, playful ways of engaging in conversation. The arts learned by the participants from West and East come into play later of their own accord in the course of the project work."

What did we learn in the first phase of encounter?

"Each one of us, of course, learned different things, but in general we all developed at the intercultural level, e.g. as regards our ability to deal with the challenges of actively accepting different approaches to the work process and learning to recognize and apply the potential of cultural diversity in our performative laboratory project. When we continue our project in September 2010, we will be better able to assess where communication on the ‘other’ continent has its possibilities and limitations."

And among the various attempts at rapprochement between the students of these artistic institutions on two different continents, one hears Shrinivas Usgoankar enthusiastically practicing the yodeling that Franziska Berger from South Tyrol tried to teach him in the breaks between project sessions.